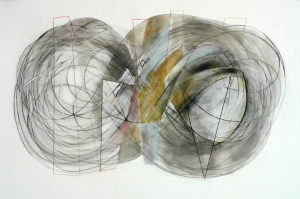 Ceres Gallery, Now and Then, including pages from the current collaborative Arc of the Viral Universe, book-sculpture of viscosity monotypes, Story of the Sea, and 11 oil pastels from earlier series.   Feb 3-Feb 27.  Wed-Sat, noon-6.  547 W. 27th Street, NYC

My fifth solo  at the Morningside branch of the New York Public Library, February 2020.  I’ll be showing monotypes and linoleum block prints.  Cancelled due to Covid.

Midoma, 545 8th Avenue, #750, 11 drawings in my series Intersections, shown together for the first time.  Several have not been exhibited before.  Reception: Saturday January 11th, 7-9 pm, open Tuesday-Friday noon till 8, Saturday 11-6.  Until January 24th.  Check for Holiday schedule.  http://midoma.com/gallery/

My fourth solo of drawings at the Morningside branch of the New York Public Library, November, 2018.  .

My third solo of drawings at the Morningside branch of the New York Public Library, February, 2017.  Check back for details, or sign up at my blog for announcements.

I have 300 tiny works in Artists in the Archives: The Alternet,  a collaborative project with over 75 artists, created by Carla Rae Johnson.  The Alternet  has found a permanent home in the Akin Library, Pawling, NY.